Home Pets Horses Should I Give My Horse Haynets? 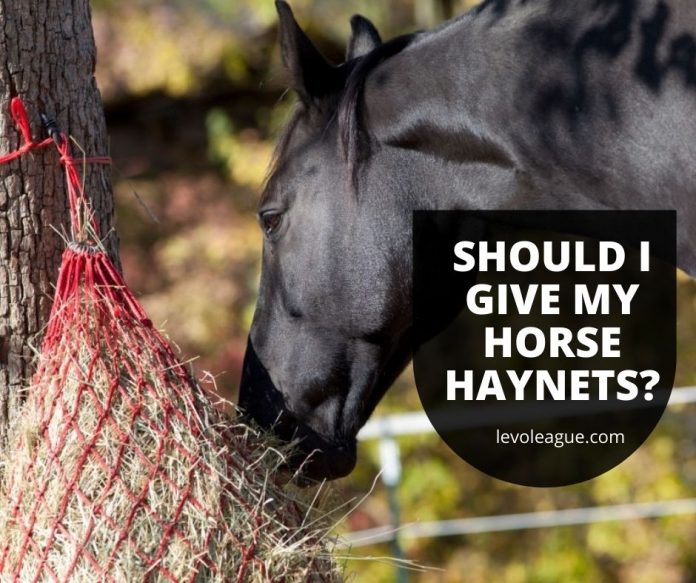 Haynets are a common sight at most stable yards and almost anyone who has cared for a horse will have filled one in their lifetime.

Hay nets are most commonly used in the stable, but are often also hung in trailers, and occasionally, on the fence in fields or pens. They are subject to immense pressures when full and being used by the horse, as they will be pulled quite violently to extract the hay.

This requires them to be made of tough material, often nylon, and to be hung from a secure fixing, not a breakaway tie which would not withstand the tugging of a feeding horse. This very necessity contributes to the problems they can cause. There are however, many reasons why Haynets are so popular.

Chance to Monitor Hay Being Fed and Consumed

Haynets are the simplest way to gauge the amount of hay being given to the horse. Spring balances are widely available through tack shops and feed stores and enable the weight of the net and the hay inside to be checked before it is hung in the stable.

A guide to the amount of hay being consumed can even be taken by measuring the net when it is removed and noting amount of wastage on the stable floor. For those giving their horse a precise diet for any reason, this can be very useful.

Hay fed loose on the floor is prone to being trampled into the bedding and soiled with horse faeces and urine. Haynets keep the hay off the ground and allow it to stay clean and appetising, saving the owner money as more of it will be eaten rather than ruined.

Haynets of the correct size can be made up in advance of when they are needed, for example, many busy owners make up a week’s worth of correctly measured haynets at the weekend. Haynets also allow hay to be transported to show-grounds or transferred between boxes very easily. An armful of loose hay is much less easy to gather up and carry.

Those who oppose haynets often cite the following arguments against using them;

Limit the Amount of Hay Available

There are many advocates of feeding horses ad-lib roughage, and even the bigger haynets have a finite capacity which may not compare with supplying loose hay.

There is some argument that even the large haynets will not give the horse enough hay for a long period in the stable, for example, overnight, and that armfuls of as much loose hay as can possibly be given should be placed in the box instead.

An Unnatural Head and Neck Position

Manufacturers of alternative feeding systems like the ‘hay bar’ and advocates of feeding from the floor argue that the horse is designed to have its head down when feeding as it is predominately a grazing animal for whom this is a natural stance.

They state that safely tied haynets are so high that they require the horse to eat with his head at an unnatural angle, causing seeds and debris to be inhaled during feeding or irritate the eyes, and muscles in the neck to be incorrectly developed.

Damage to the Mouth and Teeth

There are various reports of horses tearing the soft tissues of their mouth or even tearing out teeth when feeding from haynets.

The pressures that haynets are put under during use require them to be strong, and this very property can cause injury to an overenthusiastic horse using them.

Removal of teeth or damage to the mouth may not be life-threatening but could mean time off from riding for your horse while he recovers.

It is not too dramatic to say that haynets can endanger horses’ lives. Many people who have a lifetime’s experience with horses will be able to relate stories of horses and ponies which became caught up in a net, usually by a leg or foot. Some will wait patiently for rescue, but others will panic.

Remember that nets are not fastened to a breakaway tie. If the horse does begin to panic and thrash it may end up off its feet and trapped on the floor, which can cause internal damage if the situation is not alleviated swiftly. Serious cuts and bruises may be sustained and in a worst case scenario, bones may be fractured.

There are now more people than ever who advocate going without haynets and prefer to incur costs of wastage from feeding from the floor.

It is most important to be aware of the risks when making the personal choice about using haynets. If you do use them it is VITAL to hang them correctly. They should be almost folded in two on from the tie ring, with the end of the drawstring being threaded right through the bottom.

Never be slapdash with them and leave them tied to anything low or allow them to hang low. Always be aware that a full haynet will sag further down when emptied.

It is probably safest not to feed haynets in situations where the horses must be left unattended in their stables for very long periods, for example on yards where there are no live-in staff to check on any disturbance.