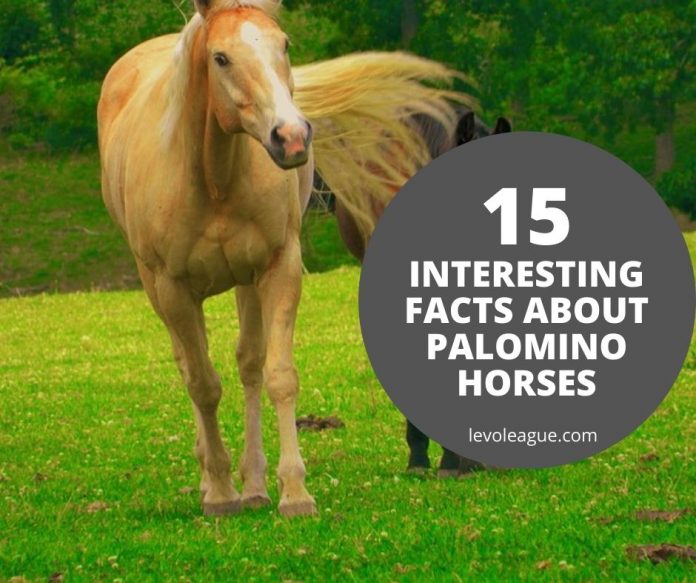 Palomino horses have been bred for a long, long time. They are known for their glistening coat of gold complemented by white mane and tail. There are a handful of misconceptions about palomino horses that need to be corrected now.

In this post, we shall clarify a thing or two. Here are the 15 most significant palomino horse facts that you should know about.

What is a palomino horse?

Tagging a horse palomino has something to do with color breeds. Hence, palomino horses are not horse types. Palomino horses are distinguished for their gold coats, white mane, and white tail. They get that color from the mixture of a chestnut gene, diluted in a cream gene.

Albeit this, there are a lot of palomino variants that have been bred over the years. For the longest time, they have been used by seasoned equestrians and have been bred for aristocrats and the members of the royalty.

Palomino horses are considered as an ancient color breed. They are classic favorites because of their active nature. They, however, are sensitive and sometimes temperamental making them not good for beginner riders. Famous palomino horses would be the Morgan and Quarter Horse, the Tennessee Walking Horse, and the American Saddlebred. Some Thoroughbreds may also have palomino colors although very rare.

1.The coat color of palomino horses changes through seasons.

The major factor behind the seeming change in the color of a palomino’s coat is its diet. Breeders argue that a high protein diet produces darker colors for the palomino horse. When protein supply is low in the winter, palomino coats become paler in color like pale brown or yellow.

They also generally get pale in color during the summer and winter making them look like champagne or creamello.

2. Palomino horses do not have a known breeding history

By the time Queen Isabella kept them, they had been around allegedly mounted by the Crusades during their rally. The earliest appearance of palomino horses would be in the 1481 Boticelli painting titled Adoration of the Magi. This is the reason why up to now, it cannot be considered a horse breed.

The association of palomino horses to the aristocracy is said to have been established by Queen Isabella of Spain. In the 1500s, the Queen is said to have kept more than a hundred palomino horses. She loved them so much that she decreed that only members of the royalty shall be able to ride them. She was also the reason behind the introduction of the palomino color breed in the New World.

With their introduction to the Americas by no less than Queen Isabella, palominos affected horse breeding among native Americans. Having proved their stealth in heavy work, native American groups turned to breed palominos.

5. Chocolate palominos are considered rare in the palomino color breed.

There are five recognized palomino colors: light palomino, gold, pearl, dunalino, and chocolate. In spite of this, chocolate palominos are considered a rare color. They are unique for their dark chocolate color; the result is cross-breeding palominos with liver chestnut. Others would argue, however, that the chocolate palomino is untrue like the champagne.

6. Champagne palominos are not recognized palominos.

7. Pearl palominos are the rarest of the color breed.

The pearl palomino is unique for its shiny golden-brown sheen and a lighter cream dilution. It is also distinguishable for its blue and sometimes green eye color instead of the usual hazel brown. It is said that the best breeds to combine in producing the pearl palomino color is a crossbreed between Lusitano and Andalusian.

8. Half of all palominos are Quarter horses

Almost all breeds can produce a palomino but the best breed with the highest palomino success rate comes from Quarter horses. As a matter of fact, 50% of all registered Quarter horses are palominos. Breeding two Quarter horses will give you a 50-70% probability of having a palomino.

9. There are two palomino organizations in the US.

The Palomino Horse Breeders of America (PHBA) and the Palomino Horse Association (PHA) are the only two recognized palomino organizations in the US. The PHBA is said to have stricter rules and more meticulous membership requirements than the PHA.

10. The first registered palomino horse was listed in 1935.

11. There are gold-colored horse breeds that are often mistaken for a palomino.

A significant number of other color breeds that produce a palomino-like color. These color breeds are dun, buckskin, champagne, silver-dapple, liver, and light chestnut with flaxen manes.

Palominos are not just popular ride horses. They are also functional for other things like trail riding, endurance riding, parades, circuses, horse racing, jumping, and reining, among others.

14. Owning a Golden Dorado means that you own a true, ancient palomino color breed.

The Spanish people have a long breed of taming and breeding golden horses with white manes. They have been doing this for 600years. The first golden horses were called El Dorado, now called Golden Dorado. Experts even suggest that the El Dorado might be the one true palomino breed.

15. Listing palominos in registries is one of the cheapest registrations today.

The average registration fee for horses is at $20-35. Registering the prized palomino horse is just $45 compared to other popular breeds that will cost you $500 and up.

Palomino horses prove to be not just lovable color breeds but also a highly interesting one. We know that horses have long been around and that they have witnessed civilizations rise and fall but they never fall short of keeping us totally reined in their steeds because of the interesting facts that follow them.

It is not just their golden coats and white manes and tails that make palomino horses one of the most beautiful and popular color breeds in the world. Their individuality, unique temperament and other behavior traits associated with the palomino color breed also make them sought-after horses.

CBD Supplement: Does Your Dog Really Need It?

David Flatley - May 21, 2022 0
CBD supplements and products are rapidly growing in popularity.  While you might love using CBD oil for joint pain...

What To Do If Your Dog Is Not Eating

How To Make Dog Coat Soft and Shiny

Does Your New Puppy Cry In His Crate?

David Flatley - April 17, 2022 0
If the answer to that question is yes, don’t panic! Most puppies do cry in their crates at first, and although a...

Considerations To Make When Choosing a New Dog

David Flatley - April 6, 2022 0
Over the past year, millions of Americans have adopted and purchased new dogs. During the pandemic, people were looking for distractions to...