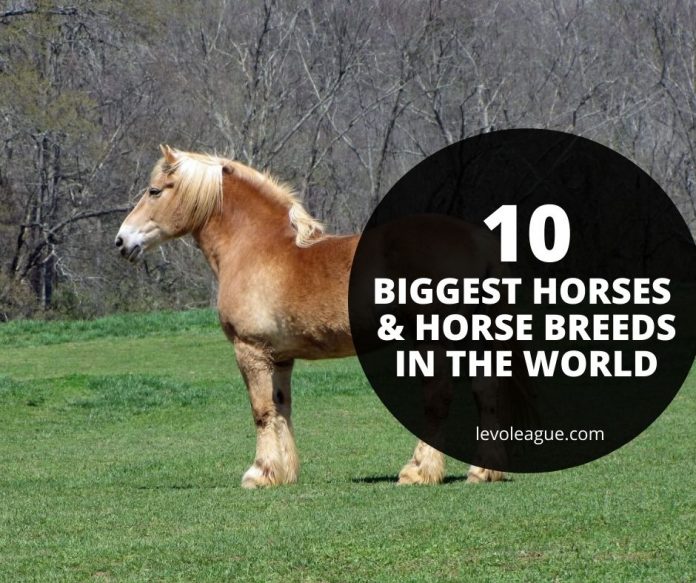 You might not believe it but big horse breeds have been around for more than 6,000 years. They have been domesticated to serve early civilizations such as the Vikings in farm work, transportation, delivery of goods, and warfare. Through the years, the function of these big horses remains.

We know the racehorses, ranch horses, and pet ponies not knowing that there is a whole range of workhorses out there. Horses are measured in terms of hands and one hand is equivalent to four inches.

The biggest horse ever recorded was the Shire named Sampson and was later renamed Mammoth. He was born in 1846 in England, bred by Thomas Cleaver of Bedfordshire. As a foal, he was already standing at 21hands. When he was listed in 1850, he weighed at least 3, 300kgs, and stood at 22hands.

Some honorable mentions under the category of the biggest horse ever recorded would be King Le Gear from Missouri weighing 1,500kgs and 20hands. The second honorable mention is Dr. Le Gear at 1450kgs and 21hands. Both were owned by Dr. L.D. Le Gear who owned a patented veterinary company in the early 20th century.

Morocco, a cross-bred Percheron-Arabian draft horse was listed as the biggest horse in 1904 owned by CH Gambol of Cleveland. He stood at 21hands and weighed 1400kgs. He was exhibited in the controversial St. Louis World Fair and at the Luna Park of the famous Coney Island.

What is the largest horse that is alive?

The largest living horse is still a record held by Big Jake, a nine-year-old Belgian draft horse. He held the title in 2013 and continues to hold the record at present. Preceding him would be two Percherons, Goliath who owned the record in 2003, and Radar in 2008. Big Jake took the title Clydesdale named Remington who reigned from 2009 to 2010.

Remington was just 6feet and 8inches, weighing 1100kgs while Big Jake was 6feet and 11 inches, weighing 13000kgs. To achieve this, owner Jerry Gilbert kept Big Jake on a strict diet of 40quarts of oats, a whole load of the bale, and a half load of hay, every day.

Big Jake will forever hold the Guinness World Record for being the largest living horse because the organization has already retracted listing animals because of issues of overfeeding for record titles. He is now old and has retired in 2018 from horse shows. He is now back at his home at Smokey Hollow Farm in Nebraska.

On top of the list would be the famous shire. It is not just considered as the largest breed but also the tallest draft horse breed of all. The largest recorded draft horse is ‘Mammoth’ which is the Shire. It weighs 1200kgs and stands at 22hands.

Being the logo of Budweiser, it is easily recognizable. It can weigh up to 1200kgs and are distinct for their feathery-haired legs. It gets its name from the River Clyde, the Scottish river where they originated.

You should know that the Belgian drafts that we know today are way larger than the original breeds from 100-150 years ago. These horses are very calm in nature and are very intelligent.

This one is considered the fourth largest draft horse breed in the world. Due to its classic look, it is often used to breed other horses especially in Australia and Europe. For a time, a Percheron named Dr. Le Gear held the title for being the largest living horse.

It might not be the largest, but it is considered as the second-heaviest draft horse in the world. They have very muscular bodies, short legs, and wide necks.

10 biggest horse breeds in the world

As the name suggests, this horse hails from Norway. It is a draft horse breed weighing 550kgs and stands at 15hands. It is considered one of the strongest horses in the world. It is used majorly as an agricultural horse specifically for pulling the plow and in carrying agricultural goods. It is also used in horse shows.

The Fjord is usually cream or white colored with an attractive, fine, upright mane of white, black, and brown. Archaeologists excavating Viking settlements found Fjord remains which suggests that it was the Vikings who first bred these big horses.

This horse is loved for its agility; a characteristic that is well-referenced in the historical archives of Scandinavia. Having served the region for almost 4,000 years, the Fjord provided wartime aid in carrying food and weapons along the steep terrains of the mountains.

This very muscular horse, as the name suggests, is a native of the former Soviet Union. It is a draft horse weighing 750kgs and with a height of 15hands. It was bred for agricultural work and heavy labor. It was used for carrying agricultural products to and from Soviet Union lands like Russia, Siberia, and Kosovo.

It comes in gray, roan, or chestnut color, with feathered legs and thick auburn/cream mane falling down to the shoulder. It is one of the most loyal, easy to work with big horse breeds out there.

This one hails from the USA. It is another draft horse weighing 900kgs and standing at a height of 16hands. It is now considered a rare draft horse breed. Breeding stopped when US farming turned to agricultural technologies.

Although few in number, it is still known for its dreamy look. It is muscular, huge, with a white mane and coat that makes it look like it is out of a fairy tale. They are mostly used in pulling carriages for tourists like in Central Park or as show horses in museums and parks.

It is another Norway native standing at 16hands and weighing 750kgs. Brown and black are the most common colors of the Dole although rare grey and tan Doles are existing.

It is a draft horse specifically originating from the Gudbrandsdal Valley. They were bred as harness horses or those carrying heavy-loaded merchant carts.

Historically, it was used by the German forces occupying Norway during the Second World War. After the years of reconstruction, Doles was again used as harness horses. At present, only a few Doles are now bred and they are now used for harness horse racing. The most bred Dole is the Dole Trotter.

This is one of the biggest horse breeds in history weighing 1000kgs and stands at 17hands. It is a draft horse originating in Belgium. It has a distinct chestnut brown color, white-colored tail, and legs down to the hooves, and a unique white mane.

It was originally bred for pulling heavy cargoes but at present, it is used as a show horse and in tourism. You can actually ride on it because it is very calm. The largest recorded draft horse was a Belgian draft weighing 1500kgs and standing at 20hands.

This is another very large draft horse breed originating from Scotland. It weighs 1000kgs and stands at 18hands. It is also considered as one of the most familiar draft horses because it was used in the official logo of the liquor company, Budweiser.

This one has a distinct chocolate brown coat, black mane, and scattered white markings. They were used for agricultural purposes but were taken by the military by the 19th century. As recognizable as they are, they are actually tagged as endangered draft horse species.

Another very large draft horse breed is the Percheron. It comes from France standing at 18hands and weighs 1300kgs. Unlike the rest on this list, the Percheron was bred as a warhorse. Zoologists claim that the Percheron might have been a cross-breed of Arab, Persian, and Roman war horses starting from 13th-century wars.

This breed comes in many colors. In the US, typical Percheron colors are roan, bay, and chestnut brown. In the UK, it is usually black and gray with scattered white markings. They are well-adapted to harsh climate conditions.

It was listed by the Guinness Book of World Records as the tallest living horse in 2003. It is now used as a show horse in France especially in tributary parades like in the Tournament of Roses and in New Year’s celebrations of California. It parades its white coat, speckled with finer black hairs all over. It sports a thin, white mane.

Originating from the United Kingdom, it stands at par with the Percheron. Officially, it is listed as the largest draft horse breed in the world. It is a draft horse weighing 1300kgs and stands at 18hands. It was a famous agricultural horse in the USA and the UK but it was taken by the military to serve during the first world war. After the war, it dwindled in number and was not bred immediately.

In the UK, shires are used for tourism and in beer advertisements. It has a mahogany brown coat, long, jet-black mane, black speckles, and hairy, white lower legs.

This draft horse is a native of England weighing 1100kgs and stands at 17hands. It takes pride in being one of the oldest draft horse breeds that are still existing today. It is an important agricultural horse and remains to function for that purpose in the rural East Anglian regions up to the North Coast of England.

Horses from this breed are very active and only come in chestnut brown color and some white markings especially in the legs. They have a sloped back and a chunked shoulder. They are said to be cross-bred from various durable breeds like Arabian, Persano, Maremmano, and Thoroughbreds.

The Suffolk punch is referenced in European wars as early as the 1500s. They used to carry food rations and weapons and were also slaughtered for meat during the famine. It has become the official team crest of the Ipswich football team and has become a favorite pub name in England.

This one hails from the Netherlands, standing at a height of 16hands and weighing 800kgs. It is a hybrid of the Belgian draft and other non-draft Dutch horses. It is stout, muscular, with a distinct gray-black color and jet-black mane and leg hairs up to the hooves.

It is bred for heavy agricultural work like pulling plows. It is also used in transportation and in pulling carriages. Heavy breeding of the Dutch draft occurred because of the pressure of production during the two world wars. After the second world war, a dramatic decrease in Dutch draft breeding happened.

You could still find a few breeds of the Dutch draft in the agricultural regions of the Netherlands. It is also used in tourism for carrying carriages.

The biggest horse breeds offer an interesting tell-tale altogether. Not only have they been around to fill agricultural functions for many Western regions, their bulk, strength, and stride also offered tactical advantages since the 13th century.

Although most of them have been relegated for showmanship purposes, they will forever remain historically significant. The fact that breeders are slowly getting on with re-breeding these big draft horse breeds is another testament to what they continue to offer to the world.